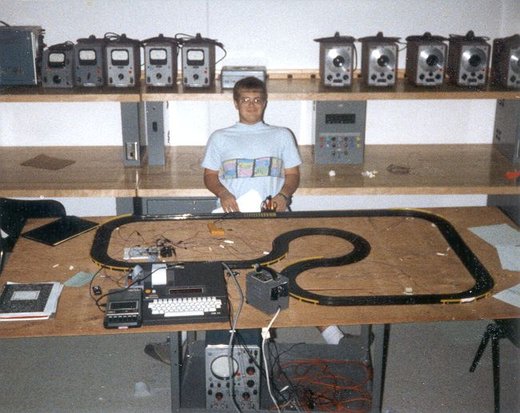 Rose Hulman Slot Car: I went on a two week trip during High School called "Operation Catapult" at the Rose Hulman Institute of Technology in Terra Haute, Indiana. The project that my team worked on was to control a slot car via computer such that it would go around the track as fast as possible.

The computer is a Rockwell AIM-6502 and was programmed in 6502 Assembler language. It was attached to the track via an I/O module which had numerous magnetic sensor switches attached to it which were mounted under the track. As the car's magnet passed over, it triggered the switch and the computer adjusted the power to the track accordingly.

It was cool.. got to fry several electronic components along the way hehe.

Oh yeah, actually had to learn assembly language programming while I was there. Other things I remember.. it was humid as hell and they had yellow dirt.